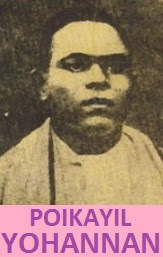 1. Yohannan was born 17th February 1879, to parents Kandan and Lechi of the Paraiyar (“Pariah”) community, at Eraviperoor, Pathanamthitta.

2. He was named Komaran at his birth, born as a slave to a Syrian Christian family of the name Sankaramangalam.

3. Though at birth he was named Komaran, he was later renamed Kumaran. Being a slave to a Christian family, Kumaran had to follow Christianity and have a Christian name and was called Yohannan. He became literate and versed in Bible.

4. In that period, Dalit communities practised untouchability among themselves. Recognising the commonalities among the Paraiyar, Pulayar (Cheramar) and Kuravar communities, Yohannan sought to create a sense of unity among them.

6. With this thought, he joined the Marthoma church, a reformist sect among the Syrian Christians, but realized the church treated Dalits as an inferior class and left the church.

7. He then joined a new sect called the Brethren Mission where he faced similar instances of caste-based discrimination.

8. Yohannan concluded that Indian Christian communities continued to discriminate based on caste, and felt this defied the basic tenets of Christianity.

11. Yohannan advocated spiritual liberation and sought to empower and consolidate the Dalits, promoting a creed in which the “slave caste” would be free of discrimination.

12. The new order, PRDS was open to both Christian and Non-Christian Dalits and Poikayil Yohannan was successful in convincing the majority of his brethren to abandon Christianity and embrace PRDS.

13. He reasoned that the Bible accounted for only Jewish history and hence Indian caste system could not be broken with it.

14. He bought 125 acres of land in different parts of Travancore for the use of PRDS. The new organisation was headquartered in Eraviperoor.

15. Poikayil Yohannan set up schools and industrial training centres in different places in addition to constructing buildings for religious ceremonies and public functions.

16. Poikayil Yohannan was also a member of the Dalit advocacy group Sadhujana Paripalana Sangham (SJPS) which had been founded in 1905 by another Dalit leader of Kerala, Ayyankali.

17. Yohannan was also twice nominated, in the years 1921 and 1931, to the Sree Moolam Praja Sabha, the legislative council of the princely state of Travancore.

18. In the Praja Sabha, Yohannan made a forceful case for the education and
employment of the Depressed Classes.

19. He specifically highlighted the economic disparities between Dalit Christians and Syrian Christians arguing how converts from the Pulaya, Paraya, Marvar and Kuravar castes were discriminated against within Christianity.

20. Some of the measures he advocated for these Dalits included provision for concession in fee for studies beyond fifth class, job reservations and land for each Dalit family.

21. On 31 March 1931, he suggested in the Praja Sabha that special scholarships be granted to the students belonging to the Depressed Classes.